Printing only Part of a Variable 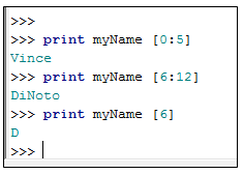 Figure 5: Printing Part of a Variable

Two lists were previously defined and are still available in the PythonWin program.  In figure 6, the print statement and the variable name outputs the complete list. The first list is a set of addresses and the second list is a set of whole numbers.  Note the square brackets around the values in the lists.

Figure 7: Printing an Individual Element of a List
Note in figure 7 instead of just placing the name of the variable after the print statement that the number two was placed after the name surrounded by square brackets.  Therefore, the returned result is what was in the third position which is represented by the number 2.  When a list variable is queried it brings all the items of the specified position(s) a simple variable returns individual characters.