Figure 9: Basic Mathematics
In Figure 9, three different variables are defined, a, b, and c.  The variable d is equal to the sum of the three variables.  After the command is executed no results are automatically displayed.  But the value of variable d is now 6.  In immediate mode the value of the variable can be displayed by typing the variable name and pressing return. A simple print statement could have been used, which is the preferred method.  In the next example parentheses are used as well as a multiplication signs.  Python follows the mathematical order of operation system so a different result would be obtained with and without the addition of parentheses.  A double asterisk is used to raise an item to a power.  Note: the variable d has a new value after each operation, while the variables a, b, and c retain their original values.

All computer languages have some type of a statement which will create a decision statement that uses Boolean Algebra.  How the statements are formatted can work differently between computer languages.  Generally, they are based on true or false logic.  When the statement is true the program branches in one direction and when false a different set of commands are needed.  In this section only a basic understanding of these types of statements will be explored with more detail in later modules.
Typically, in a flow chart a diamond shaped object is used when a decision is required.  The diamond is used because there are four points for interaction, the variables are generally shown going into the top of the diamond, with paths going out the bottom and the sides. One of the more common types of decision is known as an if statement.  Utilizing logic, a statement is written and if true it branches out of the loop, if false another comparison is made, known as an else if (elif), if the else if is true, a branch out occurs and if false either it branches to another else if or to an else statement which is the catch point for all elements that are not true.  The concept is if (a) is true do action 1, else if (b) is true do action 2, else if (c) is true do action 3, and finally if all results fail do action 4. 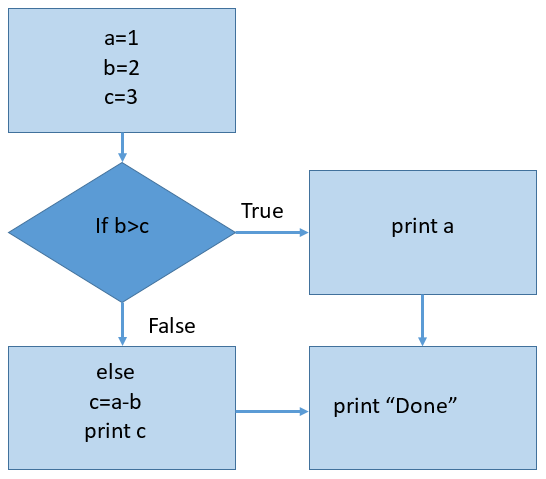 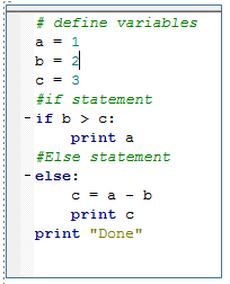 Figure 11: If Code
In Figure 10.  The initial variables, a, b, and c are defined. The if statement determines if variable b is greater than variable c.  If it is true it would print the value of variable a, but if it is false it executes what is in the else statement which subtracts the value of b from the value of a and calls it variable c and then prints this value.  No matter which path would have been used it would then print Done.  The coding   logic is shown in Figure 11.
In Figure 12 an if/elif/else statement will depend on the values of a, b, and c. 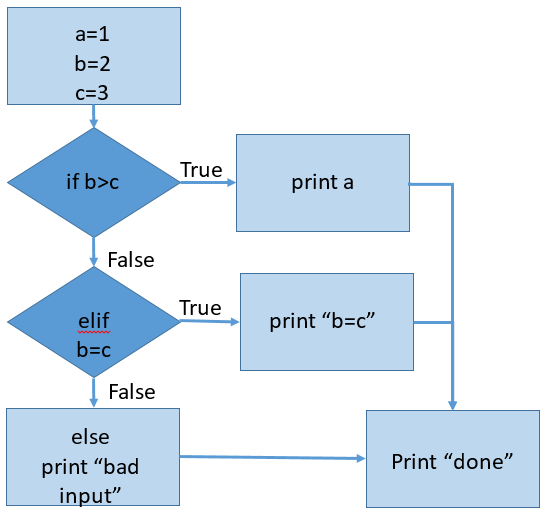 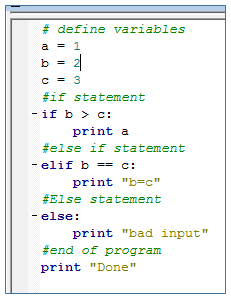 Figure 13: Code of If/Elif/Else Flow Chart
The code in Figure 13 provides a look at the script, for the diagram in figure 12.  In the future, code variables will be inputted and not preprogrammed variables that have only one result.
Powered by